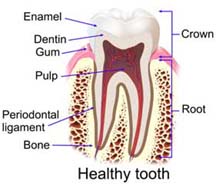 The term endodontic is a combination of the Greek words endo, which means “inside” and odont, which means “tooth.” Endodontic treatment involves treating the inside of the tooth and is also referred to as root canal therapy because it is focused on the root part of the tooth, specifically in the canal portion of the root where the nerve, blood vessels, and connective tissue of the tooth reside.

Inside of a tooth, under the white enamel and a layer called the dentin, is soft tissue called the pulp. The pulp contains blood vessels, nerves, and connective tissue and creates the surrounding hard tissue of the tooth during development.

The pulp extends from the crown of the tooth to the tip of the roots where it connects to the tissues surrounding the root. The pulp is very important during a tooth’s growth and development. However, once a tooth is fully mature, it can survive without the pulp because the tooth continues to be nourished by the tissue surrounding it.

Why Endodontic Treatment is Necessary 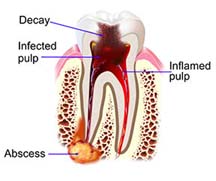 Root canal therapy is necessary when the pulp becomes inflamed or infected. The inflammation or infection can have a variety of causes: deep decay due to bacteria, multiple dental procedures on the tooth, or a crack or chip in the tooth. In addition, trauma to a tooth may cause pulp damage even if the tooth has no visible chips or cracks. If pulp inflammation or infection is left untreated, it can cause pain, and/or lead to an abscess.

Signs of pulp damage may include pain, prolonged sensitivity to heat or cold, discoloration of the tooth, and swelling and tenderness in the nearby gums. Sometimes there are no symptoms at all. 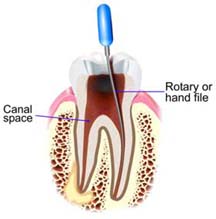 A traditional root canal involves removing the inflamed or infected pulp, carefully cleaning and shaping the canals inside of the tooth, then filling and sealing the space inside the canal. A crown holds the tooth together and reduces the likelihood of the tooth fracturing in the future. Back teeth often need crowns since a great amount of tooth structure may be lost from decay, which makes them more susceptible to fracture. Front teeth occasionally need crowns and are restored with a crown on a case-by-case basis.

Endodontic treatment can often be performed in one or two visits, depending upon the source of the problem and the complexity of the tooth. The first step is to examine, test, and x-ray the tooth. The area is then numbed with local anesthetic to reduce or eliminate pain. Next, a rubber dam is placed to isolate the tooth from the rest of the oral cavity, creating a barrier to prevent bacteria and saliva from entering the tooth during the procedure. We then use a handpiece to open access into the pulp chamber and root canals. Very small instruments are used to clean and shape the pulp chamber and root canals to remove the nerve, blood vessels and connective tissue, and to prepare the canals for the root canal filling material. 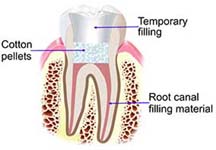 After the space is cleaned and shaped, we fill the root canals with a biocompatible material which is placed with an adhesive cement to ensure the complete sealing of the root canals. The goal of the filling material is to create a barrier so that no cells, fluids, or other matter enters the tooth at the tip of the root. In some cases, a temporary filling is placed to prevent anything from entering the tooth from your mouth. It is important that this temporary is replaced by a final restoration in a short amount of time as it is not meant for long term wear. 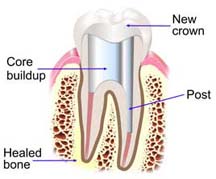 If the tooth lacks sufficient structure to hold a restoration after the root canal, a core build-up or post will need to be added inside of the tooth. This provides a solid foundation for a crown and fills the hollow space that was created to access the pulp and canals of the tooth. A crown or other restoration is then placed on the tooth to protect and restore it to its full function.

The animation on the right depicts the process of a tooth requiring a root canal from an untreated cavity to the subsequent steps that occur to restore the tooth.

The first few images show the tooth with a cavity. If the decay was removed at this point, the tooth would merely need a filling. As the cavity progresses, it breaks through the enamel, which is the hard outer layer of tooth, and it enters the dentin, which is the layer of tooth beneath the enamel. The dentin is much softer and once the decay enters this layer, it spreads much faster as it progresses its way to the pulp.

Once the decay enters the pulp, you now have bacteria from your mouth that invade the root canal system and cause destruction of the surrounding bone, which can be a very serious situation and can cause both serious pain throbbing within the tooth. At this point, you either need to have a root canal or have the tooth extracted. It is also possible for the infection to cause death due to a condition called bacterial endocarditis. It can, however, take years for the cavity to burrow its way into the pulp but it is best to treat the cavity as soon as it is detected.

The first step in the therapy is to remove the blood vessels, nerve and connective tissue inside the pulp and root canals. The walls of the canal are smoothed with either a hand or rotary file. The canals are then sealed with a filling material and a temporary might be placed if the tooth is not restored at that appointment. The last step is to restore function to the tooth with a core build-up material and possibly a post and either a filling or a crown.

Almost all back teeth will need a crown since teeth that have had a root canal have lost a significant amount of tooth structure and a crown not only restores full function but it also helps prevent a future fracture. Front teeth are crowned on a case-by-case basis depending upon how much healthy tooth structure remains after the endodontic therapy. If a crown is not indicated on a front tooth, it will be restored with a tooth colored filling material.